SETTING UP A DHCP AND FILE SERVER FOR USE WITH ZTP

Now that we have a couple vEOS instances configured and able to communicate, and we have our out-of-band network set up, we can now begin to use ZTP to provide an initial startup config.

ZTP is enabled as a default on the vEOS instances, but we still need to set up a server to provide DHCP and File services.  For servers, Ubuntu is my go-to and I usually END_OF_DOCUMENT_TOKEN_TO_BE_REPLACED Continue reading
0

Creating a Dynamic Lab Environment with vEOS and GNS3 – Part I

Install GNS3
Install VirtualBox
Get ahold of the .vmdk and aboot.iso files

It is recommended to install VirtualBox AFTER you install GNS3 to avoid problems with GNS3 detecting VirtualBox.

Go to www.arista.com, and go to Support > Software Download.  The two files you’ll want are the .vmdk file as well as the Aboot .iso file:

To simulate an out-of-band management network, we will create a vboxnet interface, similar to a loopback interface, on our laptop.  This will also allow us to interact with our virtual machines via SSH, etc.

Open VirtualBox, go to Preferences, and click Network. Select “Host-only Networks”, and then click the NIC adapter image with a plus symbol on it to add a new host-only network if there isn’t one already:

Select your newly-created vboxnet and click the screwdriver icon to configure it:

We’re going to be using ZTP to provision our switches, so select “DHCP Server”, ensure “Enable Server” is unchecked, and then click OK:

Verify you have a new interface reflecting your vboxnet configuration:

Creating a Base Image

Here is the topology: EtherSwitches have been added only to capture traffic off monitoring sessions set up on Switch1 and Switch2 to look at in Wireshark.  The Ubuntu server can be ignored for the purposes of this blog entry. 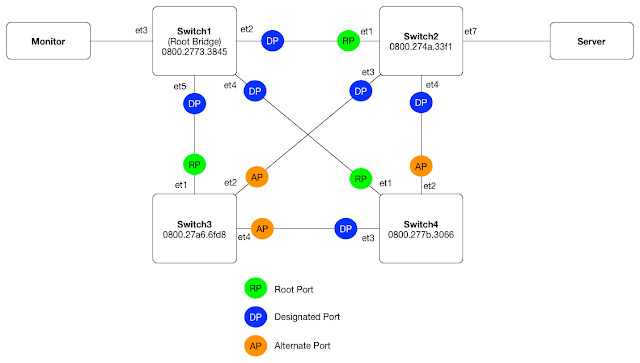 First it's important to note that only a single thing will trigger a topology change event - the transition of a non-Edge port from a non-Forwarding to a Forwarding state. Why?  Because this newly Forwarding port could possibly provide a better path to a given destination MAC address than there was before, and the CAM table will need to be updated to reflect that and prevent the same MAC being displayed on more than one port.  It sounds strange that a loss of a Forwarding port doesn't trigger a topology change event, but think about it - in a END_OF_DOCUMENT_TOKEN_TO_BE_REPLACED Continue reading
0

BGP in an Arista Data Center

Some might question the use of BGP within the data center due to it being designed for, and in the past primarily leveraged as, an EGP. However, BGP provides several benefits in a data center switch fabric, such as:
0

This was actually spurned from a comment I received on another one of my blog posts that you can find here.  Seeing that comment, I white boarded it and realized that I may have been completely wrong in regards to how Root Guard could “break a network”.

Let’s say we have the following topology: 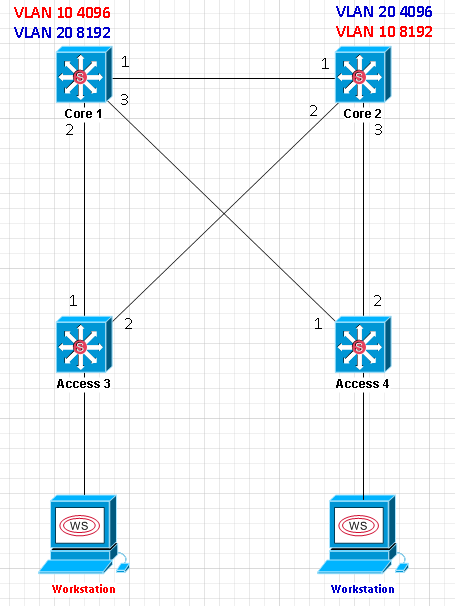 Ever curious regarding how two routers configured for OSPF become fully adjacent?  The following diagram of the process was modeled directly from RFC 2328, and the steps described gleaned from the Routing TCP/IP Vol I book.  Since we can see mention of a DR, this example must be based on a multi-access network. 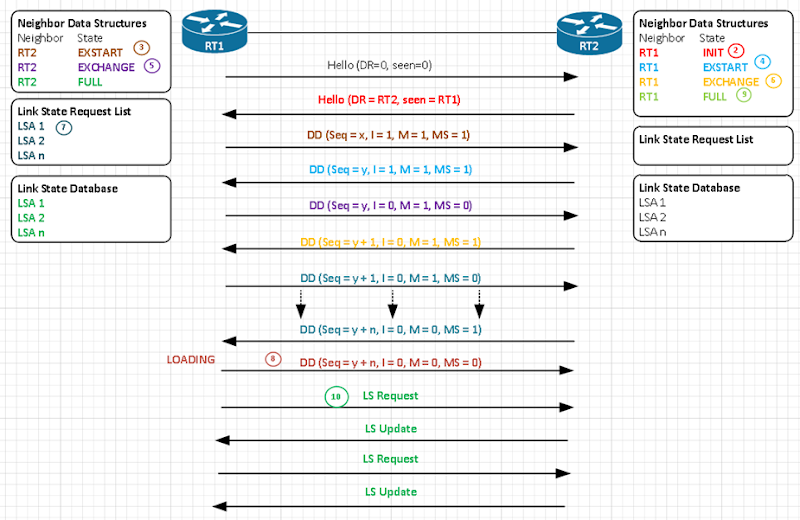 For a table describing the different LSA types, check out the first post of this series.

In the first part of the series, we looked at LSA Types 1, 2, and 3 – Router, Network, and Network Summary, respectively.  To move on to the next two LSA types, we need to bring in another Autonomous System (AS).  In the diagram below, we’ve added R5 which has an interface in EIGRP AS 1, and is redistributing that into OSPF Area 4.  The fact that R5 has an interface inside of the OSPF AS, as well as the EIGRP AS, makes R5 an Autonomous System Boundary Router (ASBR). 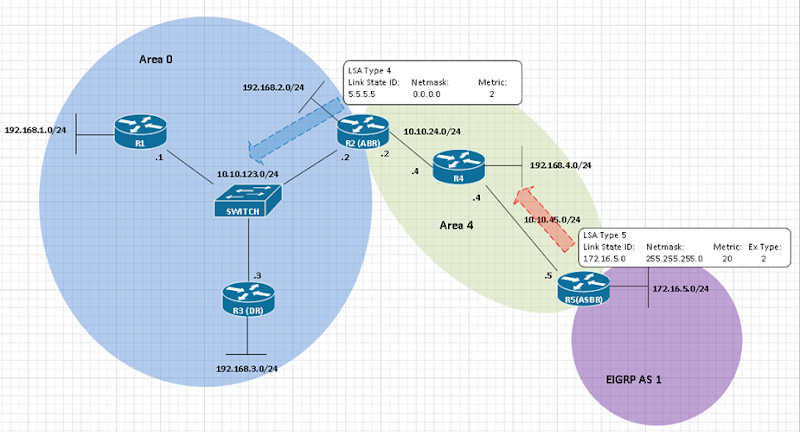 The EIGRP-oriented subnet that is being redistributed is considered an external route to the OSPF domain, so a Type 5 LSA, or ASBR External, is flooded into OSPF Area 4 containing a LSID and netmask of the subnet, plus the External Type. This important because it tells other routers whether or not to add the internal link costs within the OSPF domain to the metric to reach that subnet.  A type 2 external route specifies that only the external cost is taken into consideration. 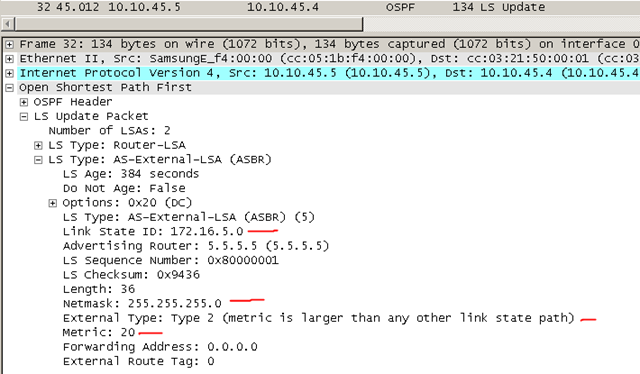 The following network is configured with OSPF with all interfaces in area 0.  Since this is a multi-access network, a Designated Router (DR) is elected which improves OSPF performance by reducing the amount of LSA flooding. R3 is the current DR, with R2 as the BDR.  R4’s interface to SW1 has been configured as a passive interface to prevent an adjacency from forming and simulate R4 being a “new” router on the network.  Wireshark is monitoring the link between R4 and SW1.

I won’t go into all the details regarding Wireshark output and the OSPF process.  If you want a more detailed analysis, take a look at my previous blog article here.  In this article, we’ll only be taking a closer look at what happens specifically in a multi-access environment.

Upon re-enabling R4’s interface for OSPF, we see R4 sends a Hello packet to the All OSPF Routers multicast address (224.0.0.5) and that no DR or BDR is listed.  R4 is “new” to the network as far as OSPF is concerned, so it has no idea about the current topology.

R1, R2, and R3 all send Hello packets with the END_OF_DOCUMENT_TOKEN_TO_BE_REPLACED Continue reading

If every router in an enterprise environment was in a single OSPF area, at some point you’re going to encounter scalability issues due to any changes in the environment causing an SPF recalculation in all routers in that single area.

LSAs and their use within areas provide a mechanism for maximizing performance in OSPF by logically segmenting groups of contiguous links so that every router in the entire autonomous system does not have to have exact copies of the Link State Database (LSDB) and to reduce the amount of LSA flooding.  SPF calculations are also isolated to each individual area rather than the entire environment.  Different LSAs are used in different situations, and are treated differently depending on the type of OSPF area involved.

The following table represents the different LSA types, and was taken from the CCIE R&S OCG.

A basic network is setup and OSPF is configured.  R1 is then prevented from forming an OSPF adjacency with R2 due to R1’s serial interface being configured as a passive interface.

Only Hello packets are seen from R2. 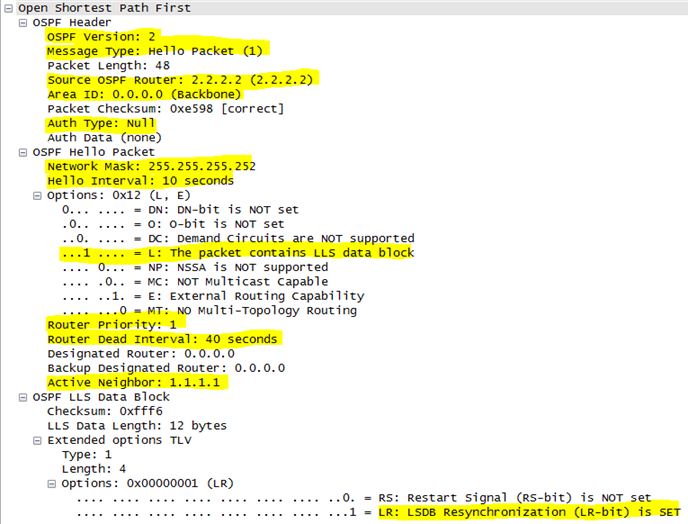 From this Wireshark output we can see:

I was watching a movie the other night with my wife and decided to hop on memegenerator.net and play around with memes.  Thought I’d share my creations. 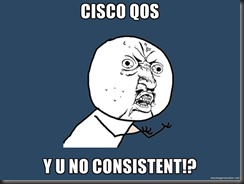 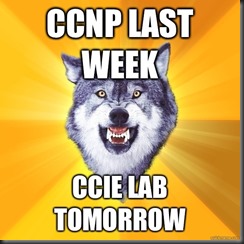 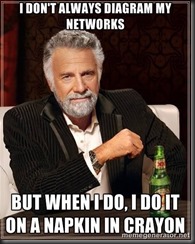 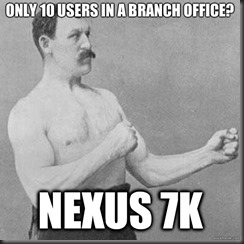 Policers and shapers identify traffic violations in an identical manner, but treat them differently.  Policers perform instantaneous checks and immediately take action when a violation occurs.  Actions can include marking, dropping, and even just transmitting the packet.  Shapers on the other hand are traffic-smoothing tools.  Its objective is to send all traffic out a given interface, but to smooth it out so that it never exceeds a given rate – usually in order to meet SLAs.  Excess traffic is buffered and delayed until the traffic once again dips below the defined maximum rate.

While policing and shaping tools are not employed to directly provide QoS for real-time traffic, they do regulate/stabilize traffic flows so that unexpected bursts in data traffic do not induce jitter and latency that adversely affects real-time traffic.

Policers determine whether each packet conforms, exceeds, or violates the policies configured for traffic, and takes the prescribed action END_OF_DOCUMENT_TOKEN_TO_BE_REPLACED Continue reading

EtherChannel allows you to aggregate several switch links into a single, fast, fault-tolerant, logical interface. 16 links can be defined for an EtherChannel, however, a maximum of 8 will be active at any one time.  The other links are placed on standby.

While having multiple links between two switches can possibly create bridging loops, EtherChannel avoids this by bundling the links into a single logical interface.  This logical interface can be configured as an access or trunk interface.

For ports to be members of the same EtherChannel, there are some restrictions. Ports must:

The full duplex maximum bandwidth for 8 links is as follows:

The other day I was at work doing an interoperability test with Cisco and Brocade multilayer switches, and we ran into a strange issue that really highlighted my “tunnel view” to the Cisco world.

Here’s a quick breakdown of the authentication types:

I set up a SPAN on the Cisco switch and sure enough, we were getting the OSPF Hello packets from the Brocade with no authentication.

After some digging, it turns out the Brocade has an Auth-Change-Wait-Time command in interface configuration mode.  This is set to 300 seconds (5 minutes) by default.  While I don’t quite understand it, the description states it allows for graceful authentication implementation.  So after you enable md5 on the interface, it waits 300 seconds before actually sending OSPF Hellos with authentication.  We toyed around with it END_OF_DOCUMENT_TOKEN_TO_BE_REPLACED Continue reading

Cisco devices that are running Cisco IOS Software and configured for OSPF are vulnerable. Devices that do not have OSPF enabled are not affected by this vulnerability.

Congestion-avoidance tools are designed for TCP traffic, because TCP has built-in flow-control mechanisms that operate by gradually increasing traffic flows until packet loss has occurred.  Once packet loss has occurred, the transmission rate is reduced before slowly ramping up again.  This means that if no mechanism is in place to control TCP, any particular flow has the ability to eat up all available bandwidth.

When there are no congestion-avoidance tools in place, and queues fill, tail drop occurs, which means all traffic is dropped.

In a constricted channel without congestion-avoidance tools, TCP connections eventually synchronize with each other – they ramp up together, lose packets together, and back off together.  This is called global synchronization and basically results in “waves” of TCP traffic.

Congestion-avoidance tools has no real benefit or use for UDP traffic, because UDP traffic does not have any retry logic.

RED combats global synchronization by preemptively and randomly dropping packets before queues fill.  Instead of waiting for the queues to fill, END_OF_DOCUMENT_TOKEN_TO_BE_REPLACED Continue reading

These two terms are often incorrectly used interchangeably – they are two different things.  Scheduling determines how a frame or packet exits a device. Whenever packets enter a device faster than they can exit it, as is the case with speed mismatches (ex. Gigabit Ethernet traffic heading to a WAN interface), congestion can occur.  Devices have buffers that allow the temporary storing and subsequent scheduling of these backed-up packets, and this process is called queuing.

The first part of building a QoS policy is to identify the traffic that you need to treat preferentially (give better priority), or differentially.  This is accomplished via classification and marking.

Unfortunately the equipment I was using didn’t support PVST+ (Sup2Ts in 6503 Catalyst Switches), so I skipped testing UplinkFast and BackboneFast as these are incorporated in 802.1w (RSTP) and 802.1s (MSTP, which is basically an extension of RSTP). 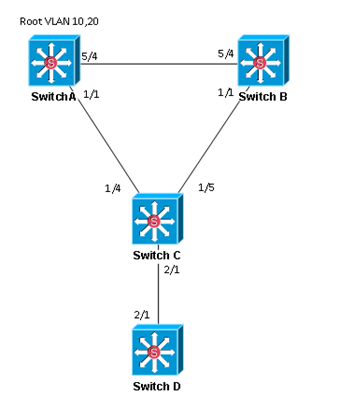 For this test, SwitchD will be treated as a Rogue Switch being attached to the network.  Initially, SwitchC’s port 2/1 is configured as an access port with only PortFast enabled.